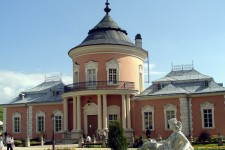 Zolochevsky Castle was established in the years 1634-1636 and it is one of the oldest in Europe.
Placed on a low hill at the river floodplain and Zolochivka robin, stone castle Zolochevsky was simply to defend and shelter. Its built in 1634-1636 he was a James Sobieski, John Sobieski's father - the king of Poland. It was regular, like a castle bastion, square for planning configuration, with high ramparts and bastions of the four cornerstones of the watchtower at the corners. Each tower was vmurovano stones with family coats of arms Sobieski: Ioannina, Hozdava, Ravin and Herburt. Earthen mounds of the castle (without casemates) has been laying low eskarpovano and strengthening the entire complex surrounded by a deep ditch. Axis was in the northern tier curtains with arched entrance tower and travel portal with the head of a lion in the castle rock. Led to the entrance gate hoist bridge over a ditch. In the castle courtyard, the side which reached 110 m, along the western two-rustovanyy curtains are housed at the corners with white stones bordering the palace windows. On the opposite side of the palace building housed commercial purposes.